If you have type 2 diabetes, it is likely that you have been told by your doctor and diabetes specialist to test your blood glucose regularly but chances are you have not been told why to do this and more importantly how to do it. Let me tell you a little story.

He has been testing every day

One of my relatives has had type-2 diabetes for more than twenty years and has been testing his glycaemia in the morning before breakfast. He has been doing it consistently every single day since being diagnosed. I asked him one day, do you know why you are doing this? His answer was that he had been told to do so. When I asked him do you know what to do when you get the read out of your glycaemia?. He said that it gave him an idea of how high his glycaemia was. Please note that he did not even mention about low glycaemia. Then, I asked do you know what a high glycaemia looks like? His answer was: 2g, … 2,5g and plus. Again, note that he didn’t seem to be aware of what a high glycaemia level was. Finally, I asked him what do you do with this readout afterwards? His answer was nothing. In other words, he didn’t know how to interpret his results nor why he was doing a finger prink every day. Sadly, I realised that he was testing every day just for the sake of it but didn’t really know what he was doing.

My point here is that, he is far from being the only one living in the unknown. In fact, many people living with type-2 diabetes may find themselves in this situation because they have not been given proper information on how and why testing their glycaemia routinely when being first diagnosed or even during their routine check-up with their doctor.

So, if you are on a journey to control your diabetes or even on a mission to reverse it or more exactly put it into remission, then know this: blood glucose monitoring is your best ally to track your progress and ensure that you are on the right path to achieve your goals.

Indeed, blood glucose monitoring plays an essential role in diabetes management. It has been recognised that blood tests can effect positively both your diabetes condition and your overall wellbeing. The key thing here is not just doing testing but doing structured testing. Now what does this mean? This means testing your blood sugar levels in a manner that provides you with insightful feedback which in turn can be very encouraging when the results suggest that things are moving toward the right direction.

Therefore, consider this: the main objective of doing home glucose testing and monitoring is to guide your day-to-day decisions about food intake and activity levels. There are different structured testing you can perform. Let’s take a look at paired meal time testing.

It consists in measuring your glycaemia levels just before a meal and then two hours later. Ideally it should remain about the same or rise by at most 2-3 mmol. Generally, this means it shouldn’t be more than 7.8mmol/l after meals. Knowing such results, you can learn to adjust your diet until the post-meal test results fall within the desired range. For example, if a particular meal triggers a spike in your blood glucose levels after two hours, then you know that you should aim to reduce the amount of carbs in it the next time you have the same meal. You can do so by cutting down on the portions, swap the foods that have high glycaemic index (GI) with foods that have lower GI until you figure out what foods and which amounts you can tolerate without adversely affecting your blood glucose levels.

Equally, if the test results are within the desired range, then you know that you can eat that food in the portion that you consumed next time you have it without needing to test.

1. Perform a paired meal time test for one meal once or twice a week.

2. Start a food journal and write down the food you had, the portions and the blood test results.

3. Using the test results, if you notice a rise in your sugar levels then make notes of what you could change next time you have the same meal as discussed above.

4. Experiment with the change, test again and keep adjusting until results fall within the desired range.

Comment down below what changes do you begin to notice in your sugar levels when performing the paired meal time testing method?

🗣Wednesday eat well: Try this lemon 🍋 curd overnight oat 🥰 to add a zest of sun and fun to your breakfast!
🗣Friday Feel Good. It's the end of a long week and probably a tough one so give yourself some love this weekend.
🗣Wednesday eat well. For a balanced and diversified diet, try to divide your plate 🥗 as per follow:

Do you know your risk of type-2 diabetes 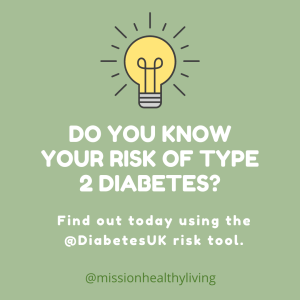